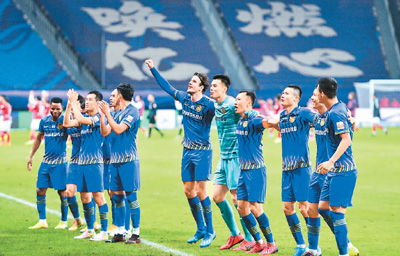 The 2020 Chinese Super League has entered a critical stage of suspense.

From October 28th,The top four in the championship group, Guangzhou Evergrande, Beijing Zhonghe Guoan, Shanghai SIPG and Jiangsu Suning will make their appearances.Compete for the league championship in a special format.at the same time,Shenzhen Kaisa, Shijiazhuang Yongchang, Wuhan Zall and Qingdao Huanghai who lost in the first round of the relegation group knockout rounds,It will also start fighting for relegation.

The four finals have something to watch

Guangdong, Shanghai, Beijing and Su-last season’s Super League semi-finals once again locked the top four this seasonShows a strong foundation and impressive strength.Unlike the marathon test in the league,Into the knockout rounds,Teams with better form and better “sprinting” ability are expected to have the last laugh.

As the defending champion,Guangzhou Evergrande continued to show its dominance in the Super League this season.After breaking into the knockout round with the first place in Dalian,Guangzhou Evergrande beat Hebei Huaxia Fortune 8:1 in two rounds,It is the easiest to advance among the 4 teams.Under the guidance of Cannavaro,Paulinho, Talisca, Fernando, Exxon, Wei Shihao and other frontcourt attack groups are in full swing.The Four Finals faced the menacing Beijing Guoan,Winning and defending the title are still Evergrande’s goals.

Beijing Guoan defeated Shandong Luneng in the last round to advance to the semi-finals.Setting aside the disputes over the penalty in the game,The defensive problem has become one of the constraints of Guoan in the strong dialogue.at the same time,The impact of injuries and avoidance clauses,Hou Yongyong and Alan will not be able to play against Evergrande,This also brings a test to coach Genesio’s formation.but,U23 player Zhang Yuning’s recent outbreak and Bakambu’s outstanding performance this season,Let Guoan see the hope of competing with Evergrande.

Last season’s runner-up Shanghai SIPG took the lead in the Suzhou Division in the first stage.but,In addition to Beijing Guoan,SIPG has not encountered real challenges.After entering the knockout round, he faced his city rival Shanghai Shenhua,SIPG was tactically restrained by its opponents.In the face of Shenhua who played with single foreign aid and double foreign aid,SIPG only relied on a penalty kick to make a thrilling advancement.Against Jiangsu Suning, who is in good shape,SIPG needs to find more solutions on the attack line.

In the past 3 years of league,Jiangsu Suning has never won from SIPG.but,Suning, who broke into the semi-finals of the league for the second consecutive year,Have stronger strength and confidence this season.Currently,The team has strong foreign players at both ends of the offense and defense.Teixeira, who was suspended in the last round of the game, will also return in the same game with SIPG.In addition,Back to the home game in Suzhou Division,It is also the advantage of Jiangsu Suning that cannot be ignored.

The relegation battle is cruel

In the Dalian Division,The league relegation battle has also entered a critical moment.This season the Chinese Super League has 1.5 relegation places,This means that if the team cannot win the two rounds this round,One foot has entered the middle armor.For 4 teams,Every minute can’t be lost.

It is most surprising that Shenzhen Kaisa fell into the relegation zone.Although this season relying on supplements to return to the Super League,But the Shenzhen team carried out large-scale signings and reinforcements at the beginning of the season.In the first stage of the competition,The team was once a favorable contender to enter the championship group.however,After falling into the relegation group,In the first round, the Shenzhen team lost to Tianjin Teda, who had never won before.Watch the opponent relegation successfully.but,Whether in terms of personnel reserves or overall strength,The Shenzhen team still has hope of relegation.How to turn offensive advantage into goals and wins,This is an urgent problem for the team.

After the newly promoted Shijiazhuang Yongchang was reversed by the Dalianese in the last round,The relegation pressure increased sharply.Encountered the strongest Shenzhen Kaisa,Yongchang’s odds of winning are not great.but,Compared with the Shenzhen team, which had a blood exchange and poor running-in,Yongchang is more outstanding in overall play style.Matthews and Muric, two foreign aids who have worked hard in China for many years, have more experience in relegation.

Wuhan Zall and Qingdao Huanghai are the first “dialogue with the competition” in the second phase.Previously in the two rounds of the Suzhou Division,Wuhan Zall double-killed its opponents with a score of 2:0 and 3:0, respectively.Have a psychological advantage.In the first stage,Zall was expected to enter the championship group,But regretfully lagging behind at the last moment.After that,The team “fired” the foreign teacher Jose,Relegation led by the Chinese coaching staff.but,Zall lost in the first round of the second stage to Henan Jianye, who has more relegation experience.Facing the challenge of the Yellow Sea,Whether Zall can maintain the stability of tactics and state is the key.

The Chinese Super League “first-year freshman” Qingdao Huanghai has been staggering this season.After the experienced leader Wu Jingui took office,Although Huang Hai once fought a classic battle against SIPG and Guoan,But when facing opponents close in strength,Instead, the team could not produce a convincing performance.Regardless of the level of foreign aid or the depth of the bench,The road to relegation in the Yellow Sea is full of dangers.

League reform should speed up

As the championship and relegation have become fierce,The Chinese Super League has received more and more attention.

Affected by the new crown pneumonia epidemic,The second stage of the league this season has adopted a two-round knockout system.This also makes the competition more intense and contingent than ever.but,The special format has also led to many unexpected and reasonable results.

on the one hand,The second stage of the game was completely overthrown and restarted.Do not bring in the points of the first stage,This gave birth to the special situation of Tianjin TEDA “win one season” and relegation.And Shenzhen Kaisa and other teams that have performed well in the first stage,But it may be relegated because of the omission of a game; on the other hand,The “cup-competition” of the second stage allows teams that lose their title and relegation to complete their tasks early.The subsequent qualifying lost the suspense and excitement.How to take into account fairness while increasing the cruelty of the game,It is a problem that requires the “ingenuity” of the league organizers.

Remove the competition system,The controversy caused by the referee’s penalties this season is even greater than ever.

Affected by the epidemic,Unlike in previous seasons, foreign referees were invited to enforce key games.This season, local referees have undertaken most of the law enforcement tasks of the game.A number of young referees stood in the Super League for the first time.But at the same time,Issues such as the scale of penalty kicks and the timing of VAR intervention,It has also aroused discussion and even doubts among all parties.In the overall plan for the reform and development of Chinese football,”Improving the restraint mechanism for referees to enforce the law fairly and for coaches and athletes to abide by the law” is one of the important measures to improve the professional league system.How to “justify the name” of Chinese football with fair and just games,It is still an important task for the reform of the Chinese Super League in the future.

武汉养生放水2020：Chinese Super League centralized competition system is feasible next year, it is expected to retain