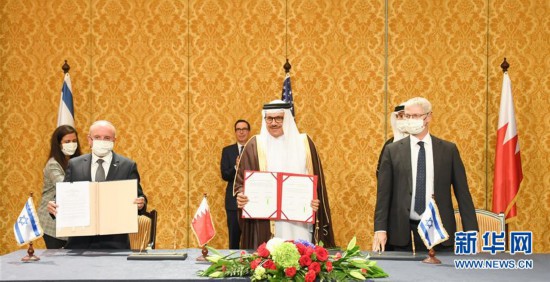 According to the Bahrain News Agency,Bahrain’s Minister of Foreign Affairs Zayeni and the head of Israel’s National Security Council Meir Bin-Shabat signed a joint communiqué on the establishment of diplomatic, peaceful and friendly relations.It marks the entry of a “new era full of hope” in bilateral relations.

Zayeni said when meeting with Ben Shabat,The visit of the Israeli delegation is of great significance,The positive results of the visit will promote the establishment of broader relations between the two countries.

Ben Shabat said,This visit will actively promote the development of future relations between the two countries,The two countries will continue to coordinate and cooperate,Contribute to the promotion of regional peace processes.

September 11,The United States, Israel and Bahrain issued a joint statement saying,Israel and Bahrain have agreed to establish comprehensive diplomatic relations.The international community has mixed reactions to this.Palestine strongly condemns the normalization of relations between Bahrain and Israel with the help of the United States.And announced the recall of the ambassador to Bahrain.