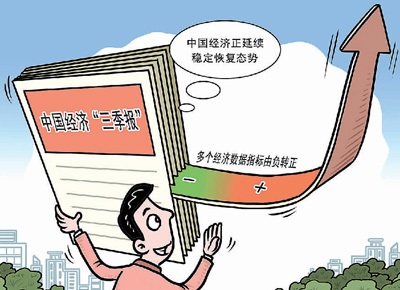 A few days ago,According to data released by the National Bureau of Statistics of China,In the third quarter of this year, GDP reached 4.9% growth rate.Overall,Steady improvement in the first three quarters,In the first three quarters, GDP increased by 0 year-on-year.7%,Successfully changed from negative to positive.This transcript has attracted the attention and heated discussion of the international community.The major foreign media and analysts generally believe thatAs the new crown pneumonia epidemic has caused severe damage to the global economy,The growth rate of a series of major economic indicators in China has turned from negative to positive.It shows that China’s economic recovery has become clearer,This is good news for the world to boost confidence.

”The foundation of economic growth is broader”

”The Chinese economy is envied by the whole world.”recently,CNN reported on this topic,The Chinese economy is showing the world the possibility of successfully containing the new crown pneumonia epidemic.When talking about relevant economic data obtained by China, the report said,Compared with the extremely fragile recovery process currently underway in most other large economies,China’s performance is even better.

CNN quoted the analysis of Julian Evans Pritchard, a senior economist at Capital Capital, and pointed out thatJudging from the more rapid recovery of the Chinese economy in the third quarter,China’s dependence on investment to stimulate economic growth is becoming less and less.The media quoted Zhu Chaoping, a global market strategist at JPMorgan Chase Asset Management, saying,Earlier this year,As part of the blockade and isolation policies still exist,The recovery of the service industry lags behind other industries,But the recent recovery heralds China’s “broader foundations for economic growth.”

The Financial Times pointed out thatChina’s GDP in the third quarter increased year-on-year by 4.9%,Much higher than the second quarter 3.2% increase,This marks that China’s economy has turned from a historic decline at the beginning of this year to a sharp rebound.China is showing signs of state-supported and industrial boom-driven recovery extending to the consumer sector.

Many foreign media have noticed thatChina’s total retail sales of consumer goods in the third quarter increased by 0 year-on-year.9%,The quarterly growth rate turned positive for the first time this year.

The British “Guardian” published an article saying,According to the latest data from the National Bureau of Statistics of China,The added value of industrial enterprises above designated size increased by 6.9%,The total retail sales of consumer goods increased 3.3%,Car sales increased by 12.8%.The article pointed out thatChinese consumers’ willingness to spend has begun to pick up,The strong recovery of tourism during the Golden Week in October confirms this.

”The employment created in China is quite stable.This ensures more consumption.”The BBC website quoted experts as saying.According to data released by China recently,China’s economy continues to grow at an unimaginable rate in other countries.In the second quarter of this year,The Chinese economy has begun to rebound,The growth rate reached 3.2%.China’s economic recovery is accelerating.

As the “outstanding” among the world’s major economies,The driving force for the steady recovery of China’s economy has become the focus of attention and discussion in foreign media.

Bloomberg believes thatChina’s aggressive containment measures in the early stages of the epidemic have enabled its economy to rebound faster than any other country.The agency pointed out thatThe economic data released by China convinced the market that China’s recovery is on track.

Sergey Savinsky, a senior researcher at the Russian Ministry of Finance, pointed out thatChina has a domestic demand market of 1.4 billion people,This is a strong guarantee for China’s economic development.In addition,China also has many factors needed to stabilize and develop the economy.Including modern economic structure, sufficient financial resources and a large reserve of talents, etc.So have the ability to meet challenges.He also noticed,The achievements in the field of scientific research provide continuous impetus for the long-term development of China’s economy.According to international experts,The next few years,The digital economy will account for 20% to 25% of world trade.And China has performed well in information and communication technology.

The strong momentum and full resilience shown by the Chinese economy make the international community generally optimistic about the prospects for recovery.

Reuters pointed out thatChina’s economic recovery in the third quarter became clearer,In September, the growth rate of industry and consumption both rose to the highest point of the year, and the cumulative growth rate of investment turned positive for the first time this year.All are confirming that the economy is still in the process of upward recovery.As follow-up policy effects continue to emerge,It is expected that GDP will continue to pick up in the fourth quarter without changing.

The Spanish “Economist” website believes thatAll signs indicate thatChina will end 2020 with positive economic growth,And will not enter a technological recession.Report forecasts,China may achieve 2. by the end of 2020.Positive growth of 5% to 3%.By the end of this year,The Chinese economy will even be better than before the epidemic,This will help to further narrow the gap between China and developed countries in some respects.

”Experience is very important to other countries”

For all countries in the world,The continued upturn in the world’s second largest economy is also exciting news.

Bloomberg News quoted economic analysts as saying,The world economy is still trying to escape the worst slump since the Great Depression,In this context,The steady recovery of China’s economy is for the rest of the world,Is an encouraging and hopeful message,Prove that as long as the epidemic is contained,The economy can be restored.

Sergey Savinsky believes thatAs an important engine of world economic growth,China’s economic recovery will bring a multiplier effect,Drive the economic recovery of other countries, including Russia.He pointed out thatChina adheres to open cooperation while achieving its own economic development.Make an important contribution to stabilizing the world economy.In the first three quarters of this year,Non-financial direct investment by Chinese companies in countries along the “Belt and Road” 130.200 million US dollars,A year-on-year increase of 29.7%.Currently,The work within the framework of the “Belt and Road Initiative” continued to advance.In addition,During the epidemic prevention and control period,The Asian Infrastructure Investment Bank launched an initial US$10 billion COVID-19 crisis recovery fund,Support members to respond to the epidemic and restore the economy.

There are also many international people who believe thatThe experience of China’s economic recovery will provide important lessons for other countries.

In the opinion of Iranian political commentator Nadili,The successful recovery of China’s economy under the epidemic,It not only reflects the great resilience and vitality of the Chinese economy,It also set an example for all countries,The whole world should learn what China has done.He pointed out thatIn the first quarter of this year,The Chinese government and people paid a huge price to contain the epidemic.And as the epidemic is gradually brought under control,The Chinese economy recovered quickly.sometimes,Making some decisions is not easy,Need to sacrifice a lot to control the situation and contain the epidemic,And after that,Short-term labor pains will have long-term positive effects,This is what actually happened in China.

Altai Atler, a researcher at the Asian Studies Center of Bosnia and Herzegovina, also believes thatFacing the huge impact of the epidemic and the complicated and severe domestic and foreign environment,China is scientifically coordinating epidemic prevention and control and economic and social development,Effectively promote the restoration of production and living order,China’s experience is very important to other countries in the world.

Nadili also believes thatRecently,Unilateralism and protectionism are on the rise.And China’s success just proves,Multilateralism contributes to the recovery and development of the global economy,Only by insisting on openness and cooperation,In order to achieve mutual benefit, win-win and coordinated development.

：China is an important contributor to the recovery of global trade

武汉嫩茶会：China's economy and society are full of vitality