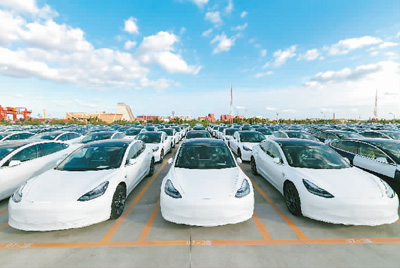 China’s first wholly foreign-owned vehicle manufacturing project—Tesla’s Shanghai Super Factory recently launched its vehicle export business.Model 3 made in China was exported to Europe for the first time,It is sold to Germany, France, Italy, Spain, Portugal, Switzerland and other countries.The picture shows the Tesla Model 3, which is being exported to Europe, taken in the Waigaoqiao Port District of Shanghai.
Photo by reporter Wang Xiang

A few days ago,The head of the Foreign Investment Department of the Ministry of Commerce gave a special introduction on the situation of attracting foreign investment in the first three quarters.And answer reporters’ questions on hot issues.The latest data shows thatJanuary to September,The actual use of foreign capital across the country 7188.100 million yuan,Year-on-year increase 5.2%; equivalent to 1032.$600 million,Year-on-year increase 2.5% (excluding banking, securities, and insurance fields),For the first time since this year, foreign investment has been absorbed in the U.S. dollar and the renminbi.

Overcoming business in China against the trend

The actual use of foreign capital in September was 990.300 million yuan,A year-on-year increase of 25.1%; January to September,26,367 newly established foreign-invested enterprises nationwide; in the third quarter,19 provinces and cities have achieved positive growth in attracting foreign investment. Is an economy attractive to foreign investment?Facts are the best proof.

”Foreign-invested enterprises have changed from waiting and watching in the early stage of the epidemic to the current increase in capital.A large number of large projects such as BMW, Daimler, Siemens, Toyota, LG, ExxonMobil, and BASF have increased capital and expanded production in China.The profit reinvestment of foreign-invested enterprises from January to September increased by 25 in U.S. dollars.5%.”Zong Changqing said,It is expected that under normal circumstances,The current growth trend will continue in the next three months,The goal of stabilizing foreign investment is expected to be achieved throughout the year.

Behind the data,It is the actual action of foreign-funded enterprises.

The actual actions of foreign companies,Let the “foreign capital withdrawal theory” be self-defeating.

”The Chinese market is open,Foreign-funded enterprises have entered and exited every year, and investment has increased and decreased.These are normal market behaviors,In line with market laws.But from the overall situation,More in, less out,Increase more, decrease less.Year after year,my country’s foreign investment is not only increasing,And the structure is optimizing and the quality is improving,This year of outbreak is no exception.”Zong Changqing said.

The first macroeconomic recovery.China’s economic growth in the first three quarters of the world has turned from negative to positive.The international and domestic contrast is obvious,It fully demonstrated the resilience and vitality of the Chinese economy,Fundamentally stabilized the expectations and confidence of foreign investors in China.Many foreign-funded enterprises regard China as a “safe haven” for multinational investment.

Continuously optimized business environment.The Foreign Investment Law and its regulations are officially implemented,Completely cancel the approval and filing of foreign-funded enterprises in the commercial field,Introduced complaints measures for foreign-funded enterprises,The business environment continued to be optimized.According to an investigation by the American Chamber of Commerce in China,Member companies believe that the investment environment has improved by 12% over last year.

Continue to open up “gravity” strengthened

Foreign capital is optimistic about China,Not only based on the current steady recovery of the economy,It is also because of the long-term opportunities brought by the continuous deepening of reforms and the full expansion of opening up.

Richard Griffith, an expert in economic history at the International Asia Institute in the Netherlands, said:China’s epidemic prevention and control has achieved major strategic results,Resumption of work and production has achieved positive results,The policy of continuously expanding opening up has worked well.In the long term,This will further enhance the confidence of foreign investors in investing in China.

Zong Changqing told our reporter,Next step,The Ministry of Commerce will continue to thoroughly implement the decision and deployment of the Party Central Committee and the State Council to “stabilize the basic market for foreign investment and foreign investment”Stick to bottom line thinking,Improve the response plan,Continue to increase work intensity,Strive to achieve the goal of stabilizing foreign investment throughout the year.

Specifically,Mainly work in four areas: continue to focus on the implementation of policies; focus on opening up; focus on services for foreign-funded enterprises; and focus on optimizing the business environment.Such as opening to the outside world,Will speed up the revision and release of the “Catalogue of Industries Encouraging Foreign Investment”,Expand the scope of preferential policies for foreign investment; implement Beijing’s plan to build a comprehensive demonstration zone for the expansion of the national service industry,Expanding comprehensive pilot projects for opening up the service industry throughout the country.